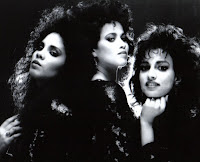 For the first time in over fifteen years, the Original Cover Girls met up at the 2008 Freestyle Music Awards. This was a magical meeting as Sunshine, Caroline and Angel all met in the lobby of the Hyatt Regency Miami on March 25th and 26th 2008.
The film crew hired to cover the 2008 FMA's was there to capture this unforgettable moment. As Producer of the FMA's worked hard to set up the moment.
"I knew I had just one shot at this, and I didn't want to blow it." For those unaware Producer of the FMA's Latif Mercado is married to Angel "The Original CoverGirl".
"I did my best to try and time everything precise, so that we can really capture a memorable moment, Say Latif. "Angel and I along with out kids arrive on Monday the 24th and Sunshine flew in on Tuesday the 25th. I was so busy and felt so bad that I couldn't even meet up with Sunshine when she arrived. She called me while I was at the auditorium setting up. I apologized to her and told her to just relax and I will call her when I get back to the hotel. By the time I got back, it was already late and all I could do was tell her to get ready for the pre-party we were holding in the club in the hotel. I sent Angel downstairs to the club, then called the film crew and told them to begin capturing footage of Angel just hanging out, and make sure the lighting was good. I then went to Sunshine's floor to pick her up and we headed downstairs. She knew she was going to see Angel then, couldn't keep that a secret, but I didn't want them seeing eachother till everyone was in place. I stood down in the lobby with her communicating with the crew until they were ready. They went into the club and found Angel and brought her outside the club since the lighting was a little better.
Just then we were cued and I sent Sunshine around the corner!
Absolutely magical. These girls lost it when they saw eachother. The crowd gathered around began to applaud, at that point I knew we had something special. The two ladies partied that night.
The next day was show time, and I was still at the venue, going over the finishing touches with my partner Ovidio Santiago. Caroline, calls me from the hotel to tell me that she had arrived. I knew I wasn't going to make it to the hotel on time so I called my film crew and put it in their hands. I told them exactly what I wanted and left it to them. I wasn't there, but from what I heard, it was another magical moment. I was told that strangers in the lobby were crying as they watched these three Freestyle historic figures meet up after over fifteen years apart. The only thing they were ever guilty of was of having a dream and becoming one of Freestyle's most famous and female groups.
What made it even more dramatic is knowing that there has been so many Cover Girl imitators, conducted by the forces behind the name. But as many have agreed, the name is nothing without these ladies.
Posted by Freestyle Music Awards at 8:09 AM